A new chapter for Manly Sailing

Manly Sailing is now under new ownership, with the company having changed hands on the 29th of Jan this year. The new owner is Finn Irvine, who is very much looking forward to steering Many Sailing through a new chapter. Finn is building on Manly Sailing’s strong foundations. It is not only expanding its juniors, adults and school programs, but also to introducing new and exciting ventures.

Finn is from the UK and has a passion for sailing which kicked off with Laser sailing in South West England. Since then, he’s instructed Laser and Dart 16 sailing in the Med and also purchased his first boat, a 27ft Halcyon. Finn has also worked in managerial positions in the tourism industry and worked extensively over the globe in the Oil Industry. He moved down under with his Australian wife two years ago and has been familiarising himself with the harbour ever since by competing in Summer and Winter series yacht racing, twilight racing and the Sydney to Hobart yacht race. He has also spent time working on the harbour which has helped him to learn the ins and outs of running a sailing business. This opportunity has allowed him to align his love for sailing with his love for teaching.

Since January, extensive renovations have been underway, breathing new life into the Manly Sailing office and shared space at the Yacht Club. We have preserved the history and character of this heritage listed building. However, we have transformed it into a fresh and welcoming space for new and existing clients to share. 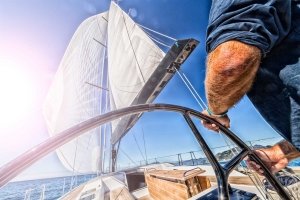