One of Manly Sailing’s assistant instructors, Ollie Ross, has just been over to France to compete in the O’pen Skiff World Championships. He was part of the Australian Team of 9 sailors from NSW, VIC and QLD.  Addy Newlan, Sophie Drummond, Banjo Nicholson, Grace and Josh Golinski, Corrado Dorrington, Russell and Connor Harris. Ollie and Josh sailed in the under 17 category and the rest of the team in the under 15s. 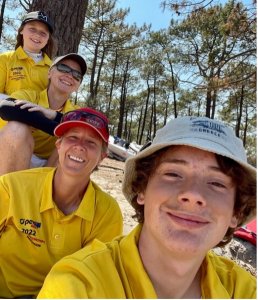 France was in the middle of a heatwave. The first day with practice racing and the opening ceremony had to be cancelled as it got up to 43degrees. The Aussies kept cool swimming in the lake.

There were 250 sailors from 12 countries which was an amazing site to watch them all launch from the boat park on the edge of the lake in Carcans, near Bordeaux. 14 races were sailed over 5 days in mostly 12-15 knot winds. Every race had a freestyle section where sailors had to either stand up and race or do a 360!

After a tiring but fun week, Ollie finished 30th in the U17 category and made new friends from all over the globe!

Ready to learn to sail? Manly Sailing runs sailing programs for children 7+. Maybe Ollie will be be your instructor!

Plan your trip to Sydney including Manly Sailing