Will winter put a freeze on school sailing? Never!

The autumn and winter seasons typically see a slowing down for youth sailing; but at Manly Sailing, things are just starting to heat up. Our die-hard sailors are excited by the stronger winds, and they’re super keen to get out on the water – after putting on an extra jacket first!

Despite the challenges the last couple of years have ushered in with COVID and remote learning, two Northern Beaches Secondary College schools, Balgowlah Boys Campus and Manly Selective Campus have supported students to attend the weekly Wednesday afternoon training sessions. This group of teenagers grew their skills immensely, adjusting their sails to confidently navigate the storm of uncertainty – and becoming competent sailors in the process. Today, they take on O’pen Skiff and school sailing as if they were a gentle breeze.

In addition, the ambitious sailors have dived into new avenues of sailing, crewing lasers, yachts and 29ers. Some have even taken up windsurfing. Their passion has led many in the group to embark on additional training, becoming Manly Sailing instructors. Now, they share their enthusiasm for sailing with younger children on the weekends and school holidays.

Let’s take a closer look at the sailors:

Aneya: Aneya is an amazing sailor; a true standout in the wave of female sailors. Not only has she won Manly Sailing Cup (the Thursday evening race series), but she’s also taken home the bronze award in the O’pen Skiff Women’s at Nationals and is a two-time winner of the Helly Hansen Manly Yacht Club Women’s Challenge. A fantastic sailing instructor, Aneya has set the bar high for her peers. 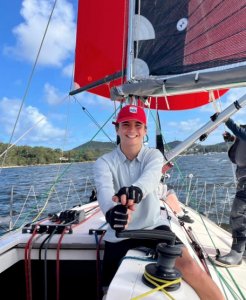 Caleb: Caleb’s hard work and determination is truly paying off. Not only is he a Manly Sailing instructor, but he’s also a confident O’pen Skiff sailor and the most recent winner of Manly Sailing Cup. Far from finished, Caleb’s passion has led him to embark on mastering keelboat sailing. He’s also begun sailing in a number of yacht races with MYC (Manly Yacht Club) and in regattas like Port Stephens Race Week, helping to crew award-winning yachts like Mondo, a Sydney 38.

Kenny: Sometimes you’ll find Kenny on the basketball court and other times, out on the water sailing. He’s a versatile, young gentleman who competes in Manly Sailing Cup and helps out at the sailing school, passing on tips to the younger kids.

Ollie M.: Even though Ollie can still fit into an O’pen Skiff, he much prefers sailing something bigger these days. He confidently competes with the MYC Adult Fleet in laser, has competed in the Metro Laser regatta. During the summer he competes in MYC club races on a yacht – often with only two onboard, including him. 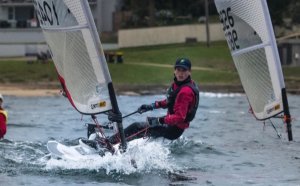 Ollie R.: Ollie has grown up through the ranks of Manly Sailing. This is probably his last year of sailing an O’pen Skiff, but with his competence and determination, it’s sure to be a good one. Ollie is a sailing instructor and an accomplished sailor. Beyond being a Manly Sailing Cup multi-award winner, Ollie has also taken home 1st in States and 4th in Nationals. This July, he’s heading to France to compete in the O’pen Skiff World Championship! And he’s already started his next step: sailing 29ers. 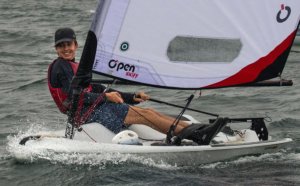 Seamus: Seamus loves being on the water and helping out at Manly Sailing in any way he can, including maintenance. He has competed in Manly Sailing Cup and O’pen Skiff Regattas, was winner of MYC Laser 4.7 point score and club championship, and is a sailing and windsurfing instructor. Seamus has completed a term of keelboat sailing and is in the process of adding yacht racing to his resumé after taking part in many MYC yacht races over the winter. 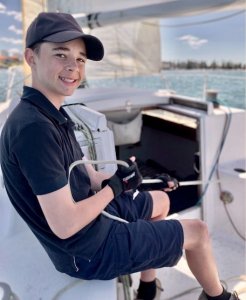 William (Will): Will has grown leaps and bounds in his time at Manly Sailing. Having competed in Manly Sailing Cup in an O’pen Skiff and the laser 4.7 fleet; he is now moving onto keelboat sailing. Will has also crewed various yachts in MYC races and competed in the Port Stephens Regatta. Also a fantastic sailing instructor, Will was awarded the Manly Sailing Instructor of the Year for 2021/2022.

Plan your trip to Sydney including Manly Sailing